The game definitely started to take a darker turn as the evening went on.

Practice makes perfect, as someone once said, and both Horu and Ghachayal had a lot of practice doing these types of jobs.  Yet, something was bothering Ghachayal; why should a lowly scribe be such a concern and require this attention? Wouldn't it have been easier, and cheaper, if Agama had just gotten some toughs from the marketplace to settle the matter? A few kaitars, a quick stab in the back when Kageshi was making his way home one night, the obvious victim of a robbery. Normally, Ghachayal didn't bother to ask why, or even expect an answer. When given a task he saw it through and that was the end of it. Many things had changed in the last few months, including it would seem himself. Lost in thought, Ghachayal suddenly started, and almost fell from the palanquin. "You realise that you've been set up" a voice had clearly said. A voice that didn't belong to Horu, or anyone else Ghachayal knew. A voice he had never heard before.  A voice that was cold and dry, that pronounced each word with a strange inflection, and sent a chill down his spine. Horu instantly responded to Ghachayal's start and scanned the inside of the palanquin for any perceived threats. "Cousin, are you alright," he asked. To which Ghachayal responded:

"I think so. Did you hear that?"
"Hear what?"
"Nothing. I must be imagining things. I thought I heard something."

As the palanquin continued on towards the clan house both occupants were so lost in thought that they barely realised that they had returned home. Once there the bearers were paid, plus a little extra to forget where they travelled today, and Horu, Ghachayal, and their guards entered the Vríddi compound. The place was abuzz with activity and excitement. Rumour had it that the venerable Agama's son had been kidnapped earlier in the day, and that he had been killed by foreigners. Who these foriegners were no one knew, but the consensus was that it wasn't good for the clan, and that it certainly had something to do with the events in Fasíltum. Horu and Ghachayal said nothing, but a nagging worry started to come over them. They needed to find Quar and leave Púrdimal as soon as possible. This brooding place was beginning to trouble them and the further away they were from this city in the swamp the better. Hopefully cousin Autso had been able to reach his contacts in the city and arrange a meeting. Someone must know where this Gurrushégmesh had sold Quar, and to whom. They quickly made their way to the bathing room, the smell of rot and ash laid heavily upon them after their visit to corpse pit.

Once cleaned up, Horu and Ghachayal went into the garden to see if Dadayal was there, which he was. After a quick exchange of pleasantries, the cousins sat down, gave Dadayal the "token" –the scribes writing mat,  and the three opened a bottle of the fine wine purchased earlier by Horu. The details of their mission were relayed to Dadayal, who was quite pleased and lavished praise upon the two.  They had barely finished their first drink when Omel hiFa'asu, the Major Domo of the house, announced that the Venerable Agama hiViridame was at the gate as per the invitation from Dadayal. Agama was shown in, met with grave concern by Dadayal and given a place of honour to sit. The normally smiling face of Agama was a mask of concern. Dadayal commiserated with the old man and showed an unusual amount of affection given their differences in rank. The drink poured for Agama by Dadayal laid untouched before him, and the attempt at small talk soon petered out.
"Oh! I almost forgot." Dadayal suddenly and loudly proclaimed.
"Look at what my cousins brought me. A gift." He stated while reaching behind him and bringing forth the writing mat. The colour drained from Agama's face when he saw it.
"Your son is a scribe worthy Agama, is he not? Perhaps he can use it? Oh wait, it is the missing son that is a scribe is it not?" Dadayal lowly and emotionlessly stated. He went on: "It would seem that someone said some very unfortunate things about my person and my cousins here had to have a gentle talk with him. Coincidentally, this fellow happened to be a scribe, and he was so apologetic once shown the errors of his ways that he insisted that my cousins take this mat as a token of apology. Isn't that so cousins?" Dadyal did not wait for a response to his question.
"One simply cannot have people going about and saying things about their betters, can one? The next thing you know these little pissants might even start to plot against us, and that simply would not do at all, would it Agama?"
The Venerable Agama, who was now visibly shaking, did not answer.
"I say Agama, that simply would not do it all would it?"
Agama silently nodded in agreement, his once proud shoulders slouched, and his eyes registering defeat and despair.
"You see cousins, how wise is Agama. It is no wonder that someone of his station has risen so high. Worthy Agama, have a drink. It really is very good wine. No? I must insist that you join us in a toast. To the Glory of the Flame Lord! To Mighty Vimúhla! Outalengba! And, to the glory of his chief servants, to the Vríddi!"
Agama drank as ordered and quickly vomited over his robes. The slaves started to go to his aid, but were stopped by Dadayal. Agama made his apologies, asked to be excused, which he was, and began to slowly make his way to the main entrance.
"Oh, wait now Agama. The front door is friends of the Vríddi. Are you my friend Agama? Are you our friend" Dadayal's gesture included Horu and Ghachayal who were drinking their wine and intently looking at Agama,  their hands slowly inching towards their weapons.
"Yes noble Dadayal hiVriddi. I am your friend" Agama quietly responded.
"Good, then you can leave by the front door" replied Dadayal.

Once Agama had left the garden Dadayal burst into laughter and filled his wine glass. It would seem, according to Dadayal, that Agama, sensing weakness, had begun to plot against the Vríddi, and their continued presence in Púrdimal. He had quietly, and discretely, or so he thought, leveled certain accusations against the clan in general and Dadayal in particular. Hoping to benefit from the seizure of the Vríddi's holdings in the city he set into motion a series of events which, he believed, would spell the ruin of the clan in this part of the Empire. Where his hatred of the Vríddi came from was not clear, but it had only recently manifested itself. Unfortunately, for Agama, a senior member of the Governor of Púrdimal's inner circle was an old boon companion of Dadayal's, and of Uncle Kemuel, and had alerted him. A few coins and promises, and the accusations had disappeared, much like Kageshi had, who by the way was actually Kageshi hiViridame, not hiValkara, the oldest and favourite of Agama's five children. A would-be-spy and gatherer of information, if Dadayal's sources were to be believed.  It was said that he often masqueraded as a lowly scribe in an attempt to gather information that could be used by his father, a member of a secret faction within the Temple of Vimúhla, to further his, their, own ends.  Now, if things went as planned the other four would soon follow Kageshi into the after-life leaving Agama isolated and weak. Once his humiliation was complete he would also leave this sphere of existence Dadayal solemnly asserted. Agama must die, but not quite yet. In the past he had often said that he wanted to visit Fasíltum one day. Well that day was approaching quickly. No, if Dadayal had his way the Venerable Agama would spend his days  in the House of Endless Sorrow, followed by disposal in a Tower of Silence. Worm food would be his ultimate destiny for raising his hand against the Vríddi. Dadayal's enthusiasm seemed to verge on the hysterical as he laid out his plans to the Sons' who, for their part, merely nodded and silently drank their wine.

Popular posts from this blog 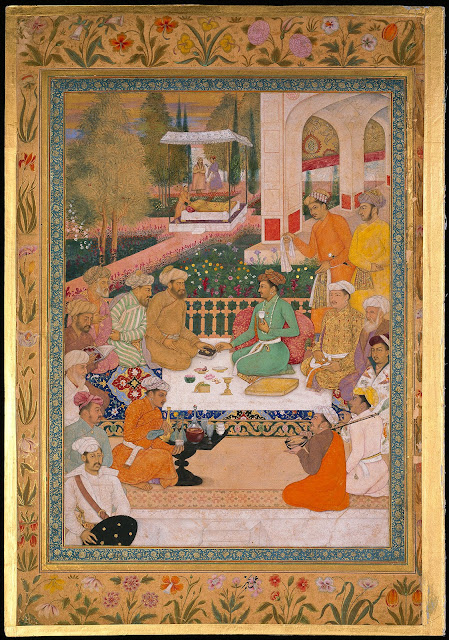 Game Session 12, November 25, 2017 This is the first part of a long and productive Saturday evening of gaming. I have jumped ahead about 8 months real time, (and 6 months game time) from the first post. The party is currently 3rd Level. 9 Dohála 2340. (6 months and many hundreds of Tsan later) Part 1. The evening is cool, but tolerable, and the nearby neatly tended garden is full of the sound of insects and other nocturnal creatures. If one carefully looks one can see armed guards patrolling the shadows.   Although only 5 people are seated on the thick carpet the amount of noise being generated by them would lead one to believe, were he not standing nearby, that a party was being held. Much laughter, and shouts of joy and disbelief could be heard. A musician is playing on a stringed instrument, adding to the general merriment. The five people are, and in no particular order, Horu hiFa'asu, Ghachayal hiKhalumis, Dadayal hiVríddi , Autso hiVríddi, and Agama hiViri
Read more

The Clan of Sky Blue Water, Distinguished and Sedulous

Some background before we begin The short of it: I fell in love with the Empire of the Petal Throne boxed game in the late 70s as a high schooler.   College and life intervened and my love of the setting sat idle until 2014, when I got back into gaming.   The group lasted about a year before collapsing—just as I was about to take over the DM slot and dust off my dormant EPT campaign. I have one player, my good friend Chris.   We don’t play as regularly as I might like, but often enough that my interest in Tékumel has remained rekindled.   Between sessions, I’ve taken the time to flesh out some of my 30+ year old ideas.   Chris isn’t familiar with Tékumel, so we decided to operate in more of a “one-off” mode so that adventures are kept short.   Once we get to a point where he is comfortable with the setting, I have a “campaign” mostly ready to go. We’re using Béthorm, a skill-based, points-buy system, with a 2D10, roll low mechanic.   Chris plays all PCs and I play the rest.
Read more